Participate at one of our meetings and events.

Fukushima was a nuclear power plant in Japan. Following an earthquake and the resulting tsunami in March 2011, the plant has been leaking radiation into the ocean. This has raised concern for our salmon and if they are still safe to eat.

Integrated Fukushima Ocean Radionuclide Monitoring (InFORM) is a network of people from a variety of agencies and Universities and includes citizen scientists. They assess radiological risk to Canada’s west coast and share the information on their website (https://fukushimainform.ca/). They are confident that Fukushima radiation levels do not pose a risk to either humans or the ecosystems of Western Canada. 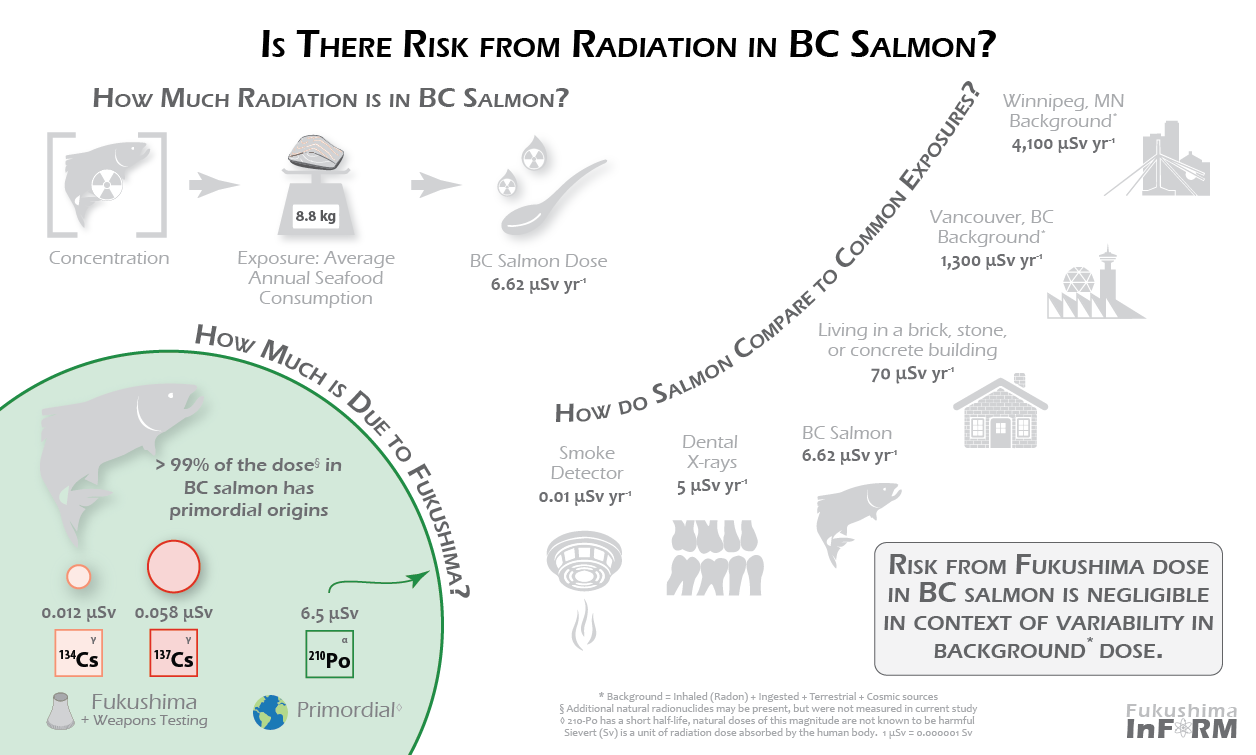 Over-escapment: Is there such a thing?

Over-escapement is described as having more salmon spawn than is required to meet the fisheries management goal. It may result in fewer offspring per spawning adult but it might be necessary to conserve salmon biodiversity and promote re-colonization of habitats.

Support for the concept of over-escapement is usually a result of the Ricker stock-recruitment curve, which estimates the maximum sustainable yield (MSY) of a discreet population of fish. However, this overly simplistic model only accounts for harvest considerations and does not consider how spawners affect the broader ecosystem. Scientists found a deficiency of marine derived nutrients (nutrients from salmon) in north western U.S. freshwater systems from diminished salmon returns, with a decrease of more than 90% of some nutrients. Scientists encourage fishery managers to consider salmon as important contributors of nutrients to increase the habitat productivity of streams. The enriched habitat sustains the production of invertebrates, other fish and species of birds and mammals that consume returning adult salmon. The carcasses release nutrients which feed invertebrates and results in fatter juvenile salmon more capable of overwintering and contributing to stock production of wild Chinook salmon.

Several scientific papers support the idea that over-escapement does not have a negative long term effect on salmon populations. Scientists found a decrease in offspring at high spawning escapements but no evidence that over-escapement led to a collapse or near-collapse of salmon populations. In addition, Scientists considered that positive effects existed from having a large number of spawners, including that high numbers of spawning salmon encourage them to explore new habitats, which can result in re-colonizing extirpated populations or creating new populations.

Prior to fishery management, salmon persisted through ice ages, volcanoes, and river changes. Salmon faced difficult times, but they adapted and survived both gradual and rapid stresses. It is believed that a highly variable life history, including straying of spawners during periods of high abundance, are some of the reasons they were able to adapt and survive.

Over-escapement: Is there such a thing?

Over-escapement: Is there such a thing? – with references

Pollock are part of the cod family and targeted in one of the world’s largest commercial fisheries, the majority of which takes place in the Bering Sea. Pollock is a main ingredient in fish sticks, fast food fish burgers, and imitation crab, shrimp and scallop and is a billion-dollar industry.

While there are no commercially directed salmon fisheries in the Bering Sea or the Gulf of Alaska, salmon are caught unintentionally in the pollock fisheries.  Salmon and pollock intermingle in the same locations at the same time and are entangled in the same nets. Salmon caught in this way are considered to be “bycatch”.

The body responsible for the management of the pollock fishery is the North Pacific Fishery Management Council. Bycatch numbers are reported as part of the US National Marine Fisheries Service’s catch accounting system. The total number of salmon from all rivers caught as bycatch peaked in the mid 2000’s with peak catch of Chinook (125,000) and chum (710,000). Since then, various regulatory measures have been implemented to reduce the bycatch of salmon and these measures remain in force to the present-day.  These measures include: classifying salmon as a prohibited species, salmon saving areas, voluntary rolling hotspot system, salmon excluder devices, and bycatch incentive plan agreements. The bycatch is also reported to the Yukon River Panel twice a year and is documented in the annual Joint Technical Committee’s Report.

Bycatch numbers of Yukon River Canadian salmon are not available for all years; however, scientists can estimate Canadian Chinook bycatch from samples for some years. The actual bycatch is more than would return to the river due to natural mortality in the ocean. This can be estimated by determining the percent of the bycatch that is destined for Canada, then applying an adjustment for natural mortality.

How many Canadian Yukon River Chinook are removed from the river due to bycatch?

Genetic analysis of bycatch samples from the pollock fishery, showed the number of Canadian Yukon River Chinook was a very small component of the total Chinook bycatch. Scientists estimated that an average of 892 Chinook adults would have returned to the Canadian portion of the river each year if they had not been caught. While this does not seem like much, it was approximately 12% of the Canadian harvest during this period. Note that the Canadian harvest was restricted due to conservation concerns resulting in commercial and domestic fisheries closures, restricted recreational fishery, and voluntary reductions and closures in the First Nation fishery during this time period.

How many Canadian Yukon River Chum are removed from the river due to bycatch?

What is the pollock fishery, bycatch, and how does that affect our salmon? – with references

Why are fishers switching to smaller mesh sizes?

Fishers have expressed concerned that they are catching smaller Chinook salmon than they used to on the Yukon River. Multiple factors may affect the size of Chinook.  Specific concerns were raised regarding large mesh nets removing larger and older Chinook (mostly female) than smaller mesh nets. A concern is that harvesting the larger Chinook will result in smaller salmon spawning, which could contribute to smaller offspring. Scientists found that Chinook have slowly been getting smaller. This is concerning. Recent research found that Chinook length has decreased 6% but that potential offspring production has decreased by about 15%.

Salmon managers took action. In 2011 Alaskan fishers were restricted to using 7.5” mesh size or smaller. In Canada, First Nation fisheries are managed by First Nation Governments and most already used smaller mesh. The Canadian Chinook commercial and domestic fisheries has not operated since 2009 and would have been restriction to 6” mesh. Since 2019 the Yukon River Panel recommended Yukoners use 6” or smaller mesh nets in the Yukon River.

How do you measure your mesh size?
The most common way of measuring mesh size, is the stretch mesh size. Stretch the mesh vertically from knot to knot and measure from the centre of each knot, as shown in the figure.

Salmon stock productivity: What is it and how does it affect our salmon?

So, what influences stock productivity? Productivity is influenced by environmental conditions, harvest, predation, and competition. It is difficult to understand and study due to complex interactions over the range of habitats at different life stages (freshwater, coastal, and marine).

Stock productivity has been estimated for the broad Canadian-origin Yukon River Chinook since the 1970s. Chinook productivity has ranged from a low of 0.93 in 2006 up to a high of 5.51 in 1991 with an average productivity of 2.35. However, recently Chinook have been in an extended period of low productivity.

Yukon River fall chum (U.S. and Canadian-origin) estimated stock productivity has been variable over the years and has dipped well below 1 on several occasions. Productivity has ranged from a low of 0.26 in 2005 up to an extremely high productivity of 8.88 with an average of 1.76. Recent productivity is indicating a downward trend.

Salmon stock productivity: What is it and how does it affect our salmon?

Salmon stock productivity: What is it and how does it affect our salmon? – with references

Catch and release of salmon

Salmon may be released to allow an angler to capture and keep a larger fish.  Some anglers only catch and release fish.  The effects of catch and release to fish will vary.  The effects will depend on the angler’s skill in landing, handling and releasing it.  A strong, healthy fish will be better able to withstand additional stress than a fish in poor condition.  The effect will be greater when fish are already stressed from environmental conditions such as warm water temperatures. When a fish is captured and released more than one time the effects will be cumulative.

Commercial Fishing Along the Yukon River

Commercial salmon fisheries in Alaska target summer and fall chum.  The commercial Chinook fishery fell by about 50% in 1998 and has not recovered since.  Catches since 2008 have been very small.  The Canadian commercial fishery is centered in the Dawson area, with a smaller fishery in the Minto area.  Fall chum are targeted.  Catches have been low since the closure of the Han Fisheries plant and associated roe market in 1997.  The Chinook fishery was reduced to less than 50% in 1997 and has either been closed or has had very low captures since.

Harvest sharing and border escapement objectives are based on numbers of adult salmon.  There is no consideration of sex, size or age composition.  The average size and age of Yukon River Chinook has changed. This is probably a result of decades of size and sex selective fisheries.  Quality of escapement includes the health of the individual salmon.  Rising river temperatures may cause direct effects to fish health.  It may also increase the rate of infection and virulence of diseases and parasites.  The health of salmon that have struggled free of nets may also be effected.

There are different perspectives on salmon escapements.  Perspectives of managers are based on estimates of the total number of salmon entering the river and then the cross border escapement to Canada.  The estimates are used to make decisions on openings for the fisheries.  Fisher’s perspectives will mainly be based on the number and condition of the salmon they catch.  Their perspectives may also be based on long term local experience and oral tradition.  This may include periods of abundance and scarcity.  This may cause a difference in perception of escapement between managers and fishers.

The fishery manager’s perspective of escapement may be based on achieving the greatest number of returning adults from the lowest numbers of fish allowed to spawn (maximum sustainable yield).  They do this from estimates of salmon spawning and calculations of how many salmon will be produced from each salmon that spawns.  Generally, lower numbers of spawners produce more adults than very high numbers of spawners.  However environmental conditions and ecosystem needs are not considered.  Fishers’ perspective of escapement is usually based on having sufficient spawners to ensure the safety of the salmon run and the fishery under all environmental conditions.

The Salmon Sub-Committee has taken action on a variety of issues over the past several years to ensure that salmon resources are preserved for future generations. Some key accomplishments follow: